Bull-jumping ceremony of the Hamer, Ethiopia 2011
Bull-jumping is a ceremony of the Hamertribe in the Omovalley, south of Ethiopia. Before passing into manhood a young Hamerboy has to prove that he is ready for that, by jumping naked on the bulls from back to back over about ten to twenty bulls which have been lined up side by side. During the ceremony young female relatives of the boy dance and spring with bells and beg to be whipped. The deeper the scars the more they show their love for their boy. When the boy falls of the bulls, he is whipped and teased by women. If he succeeds, he jumps to the ground and he turns around and do it again. He completes the task three more times.
The women of the family are running and singing and when he is jumping they are in a ring around him and sing to encourage him. 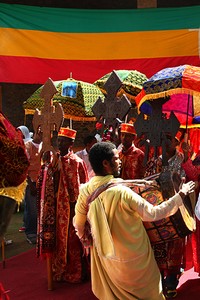 Timkat Celebration in Gondar, Ethiopia 2011
Timkat is the Ethiopian celebration of Epiphany. In three days the baptism of Christ in Jordanriver is remembered. Every year during Timkat (19 january) the water in the pool is blessed by priests.
Ethiopian Orthodox Christians are showered with water or jump in the water for the blessing. In Gondar it happens in Fasilidas' Bath.
During the festivities people wear white clothes, some women make tattoos on their face and neck as they did in medieval times.
Boys and girls from the churches make music on drums and are singing and dancing together. Other groups of boys are running around, tooting on a horn, shouting war-cries and frightening swing with sticks.
In Gondar the procession of several churches start in the old Debre Birhan Selassie Church and head to the medieval Bathing Palace of Emperor Fasilidas.
Priests with colourful clothes, walk with gold embroidered umbrellas. They carry models of the Ark of Covenant, the Tabot, wrapped in clothes, on their heads.
That night everybody at the compound prays, eat and wait with candles for sunrise the next morning.
Then the priests put the crosses in the water of Fasilidas' Bath and bless the water.
Some Ethiopian men restless have waited all the time and now they jump in the blessed water and they fill bottles and shower everybody around Fasilidas' Bath.
The next day in procession with songs and dances, the Tabots again are brought back to the different churches.